Me and Juliet
by Playhouse 2000

Lifted from the heart of the “Golden Age” of American Musical Theater, Rodgers and Hammerstein’s Me and Juliet is a classic from the same greats that gave us The Sound of Music, Oklahoma, and The King and I.  Unlike those iconic titles, this backstage romantic comedy is rarely performed, which gives us a chance to present a “brand new” experience from a beloved, familiar source.

In their inimitable style, R&H tell a two-pair love story (think Guys and Dolls) taking place behind the scenes of a long-running and successful “musical within a musical” also called Me and Juliet.

“Jeanie, “ a contented chorus member, finds herself the focus of a rivalry between the brash lighting technician, “Bob” and the assistant Stage Manager and aspiring Director “Larry.”  Meanwhile, Stage Manager “Mac” finds complications in his romance with flirty dancer, “Betty” when she wins a replacement role in the show, breaking his rule against ever being involved with a member of his own company.

The show’s songs celebrate a life in the spotlight, including the Betty’s big showstopper “It’s Me,” Jeanie’s sensitive ballad “No Other Love Have I,” Larry’s evocative depiction of the theatrical audience “Big Black Giant,” and the chorus’s “Intermission Talk” and “Marriage Type Love”.

For Leading and Secondary Singing Roles: Please prepare a short song in the classic Broadway style – 32 to 64 bars is sufficient – OR present the song we will teach at the audition. Please bring along sheet music for the provided accompanist .  No a-cappella auditions or pre-recorded accompaniment please.

For Ensemble (and all Speaking Roles): We will teach a short song from the show and ask you to sing in small groups.

Everyone will participate in a Movement Audition: – please dress comfortably and wear (or change into) soft-soled, close-toed shoes.

Some may be asked to do “cold readings” from the script.

Possible “Call Back”:  We may ask some auditioners to return for a “Call Back” audition on Tuesday, November 22 at 6:30.  Not all roles will require call-back, and not being called back does NOT indicate the consideration being given to your audition.

The show will run February 3 through 19, 2023 (just in time for Valentine's Day!), so we'll be holding auditions on Sunday and Monday, November 20 and 21 - the weekend before Thanksgiving.

Rehearsals will start December 5 through 16 to learn music, and then take a break for Christmas, re-starting on January 2 to prepare for an opening on February 3.

The “Cast” of the “Musical Within A Musical”

Speaking roles that will all double in the Ensemble. 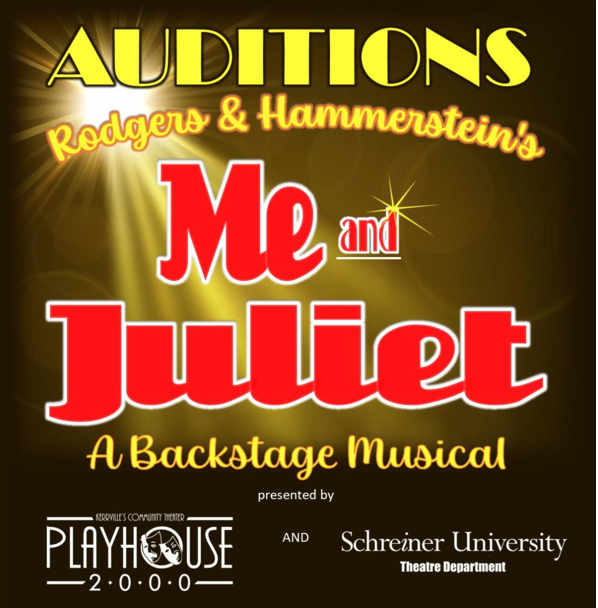