Directed by Meredith Melville, this show brings the Disney classic to life on stage. With all your favorite songs and characters, this production is sure to be fun and adventurous. Join us for a great time!

Nothing to prepare. Just bring yourself and wear something you can move in. We'll be singing, acting, and dancing. Cold reads from the script.

A mermaid and King Triton's youngest daughter. She is obsessed with everything about the human world, and dreams of becoming a part of life above the water. Hardheaded, naive, and emotional, but also kind hearted.

A human monarch who has no interest of taking the crown. A handsome, affable lad with a buoyant, adventurous nature. After Ariel saves his life, he becomes obsessed with finding her and hearing her voice once more.

A fish and smitten with Ariel, his best friend. Rambunctious but cautious, fearful of the dangers that lurk in and above the water.

A disheveled seagull and expert in human artifacts. Loudmouthed, optimistic, and a bit ignorant, despite his supposed expertise.

King of the Sea and Ariel's father. Beneath his imposing presence and commanding nature lurks a harried single father who will do anything to protect his daughters. The death of his wife has also given him an irrational fear of humans.

A crab and advisor to King Triton. A musical virtuoso who is constantly distraught from keeping after Ariel. Despite his paranoia, he can't bring himself to stand in Ariel's way.

An eel and one of Ursula's lackeys. Oily and spineless, he will say anything you want or need to hear.

An eel and one of Ursula's lackeys. Oily and spineless, he will say anything you want or need to hear.

The banished Sea Witch and sister of King Triton. Supposedly spurned at childhood, she will use whatever method necessary to steal the kingdom and claim it as her own. Malevolent, calculating, and deceptive.

The French palace chef, diabolical and violent. A culinary perfectionist with an affinity for blades, seafood in particular.

Ensemble is made up of Crew Members (Pilot, Sailors); Sea Creatures; Mersisters (Aquata, Andrina, Arista, Atina, Adella, Allana); Gulls; Maids; Chefs; Animals; Princesses. We are looking to cast people of all ages and vocal ranges in these roles.

Ages and genders in the character breakdown are suggestions. It is possible that people not of a certain age range or gender may be cast in certain roles. We are ultimately looking for talent. 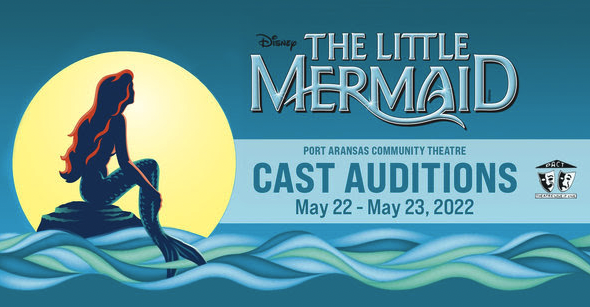