Lend Me A Tenor
by Fredericksburg Theater Company

A sensation on Broadway, this madcap, screwball comedy is guaranteed to leave audiences teary-eyed with laughter. On a historic night at the Cleveland Opera Company, world-famous tenor Tito Morelli is to perform. Through a series of mishaps, Tito receives a double dose of tranquilizers, causing the house manager to believe he is dead and setting off a chain reaction of slapstick and mistaken identit

FTC to Hold Auditions for Lend Me A Tenor

Auditions for FTC’s Spring Comedy Lend Me A Tenor will be held Monday and Tuesday, February 14th &15th, 2021 at 6:30 p.m. at the Steve W. Shepherd Theater, located at 1668 Highway 87 South in Fredericksburg. Actors will also be asked to read scenes from the script. Audition sides will be available to be checked out from the FTC Box Office starting Monday, January 10th.

Video auditions may also be submitted. All video auditions must be sent to Executive Director Steve Reily at fbgtheaterco@verizon.net with the subject line “Lend Me A Tenor Audition”. If you have any questions, you can email the theater office at fbgtheaterco@verizon.net with the subject line “Tenor Auditions”.

Rehearsals are typically Monday through Friday, 6:30 pm to 9:00 pm.

April 25 -28 are technical/ress Rehearsals. For the success of the production, attendance atthese rehearsals and at all performances is mandatory for the entire cast and crew.

who often loses his temper at the slightest mishap.

Maggie Saunders – Saunders' daughter, and Max's girlfriend. She has a great admiration for Tito.

Maria – Tito's long-suffering wife, with an "Italian temper." Loves Tito, despite his philandering.

Diana – The opera's ingenue soprano, who is flinging her way"to the top. A seductive woman (and she knows it).

Julia – Chairwoman of the Cleveland Opera Guild, who considers herself a "grande dame."

The Bellhop – A comic relief character who has an ongoing feud with Saunders. An obnoxiousopera fan, the bellhop keeps showing up at the hotel suite at the wrong moment, trying to get an autograph and a photo of Tito.

About the Fredericksburg Theater Company: The mission of the Fredericksburg Theater Company (FTC) is “to provide superior theatrical programs for regional participation which entertain, educate, enrich and inspire.” Formed in 1997 by Jeryl Hoover, the theater has grown to an audience of over 13,000 annually. All performances are held at the Steve W. Shepherd Theater. FTC is a 501(c)3 non-profit organization. It has received statewide recognition from Texas Commission on the Arts, Texas Nonprofit Theatres, as well as grants from various arts endowment organizations. For the last four years (2016 – 2020) FTC has been recognized by BroadwayWorld.com as “The Best Theatre in the San Antonio Region.”

FOR ADDITIONAL INFORMATION OR INTERVIEWS: 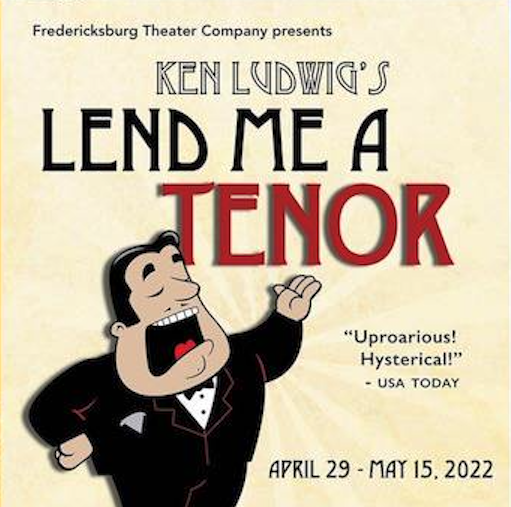