The Goodbye Girl
by S.T.A.G.E. Bulverde

Paula, a former Broadway dancer, and her young daughter are outraged to find that Paula’s former live-in lover has fled to Europe and subleased their apartment to a hyper Chicago actor, Elliot.  Neither Paula nor Elliot is prepared to acknowledge the other’s right to the apartment, but they reluctantly agree to share it.  Can they learn to live together despite their opposite natures and constant bickering?

Performers are needed for the following roles: 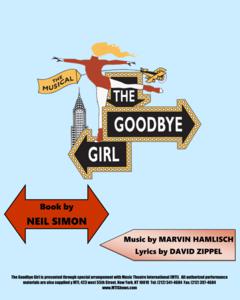 Doors Open for Dinner at 6:30PM Thursday through Saturday, Performance begins at 8:00PM

Doors Open for Lunch at 1PM on Sunday ...