Little Shop of Horrors
by Playhouse 2000

We’ll be presenting the 2003 “Revival” Version of the show, which expands both the orchestra and chorus from the original production.  We’ll be using an expanded chorus in selected portions of the show, but this will be a somewhat reduced rehearsal commitment than it has been in prior years.

We’re also open to expanding the “Girl Trio” to include more performers here, if the audition warrants that.

Fill out the on-line form (CLICK HERE) for any P2K show you are interested in auditioning for.  You still need to attend the auditions.  The director will have your form when you come to auditions but may ask for some additional information.  Thanks.

Seymour Krelborn: (M – plays 25 to 35 or so) An insecure, put-upon florist’s clerk and eventual hero. He is a genuine, well-meaning man who is taken for granted because of his clumsy ways and poor social skills.

Audrey: (F – plays 25 to 35 or so) Bleached-blond, Billie-Dawn-like, secret love of Seymour’s life. She has poor self-worth and education, but incredibly good looks and a sweet and vulnerable demeanor.

Mr. Mushnik: (M – plays 50’s plus) The seasoned owner of the failing East Side flower shop and Seymour’s nosy boss. He is profit-driven, greedy, and manipulative.

Orin Scrivello: (M – Mid 30’s to 40’s) An egotistical dentist with a passion for leather and sadistic tendencies. Audrey’s abusive boyfriend, who is targeted by Seymour.

The Plant (Audrey II):  Puppet. A full-body puppeteer that may double as other sizes of the plant.  This is a very physically demanding role.

Voice Of The Plant: (Usually male (but?) any age) An actor/vocalist located offstage. The voice is that of a conniving, street-smart ‘villain.’ A funky Rhythm and Blues voice is best.

Crystal, Ronnette and Chiffon (may be doubled) (Females – play age teen to mid-20’s) are street urchins, acting as the occasional Greek Chorus. Young, hip, and smart, these girls are the only ones who have a grip on reality.

Residents of Skid Row and other additional characters (M and F – all ages)  Denizens of the world inhabited by the group above, they represent bums, tv reporters, tycoons – and sing/dance the big production numbers. 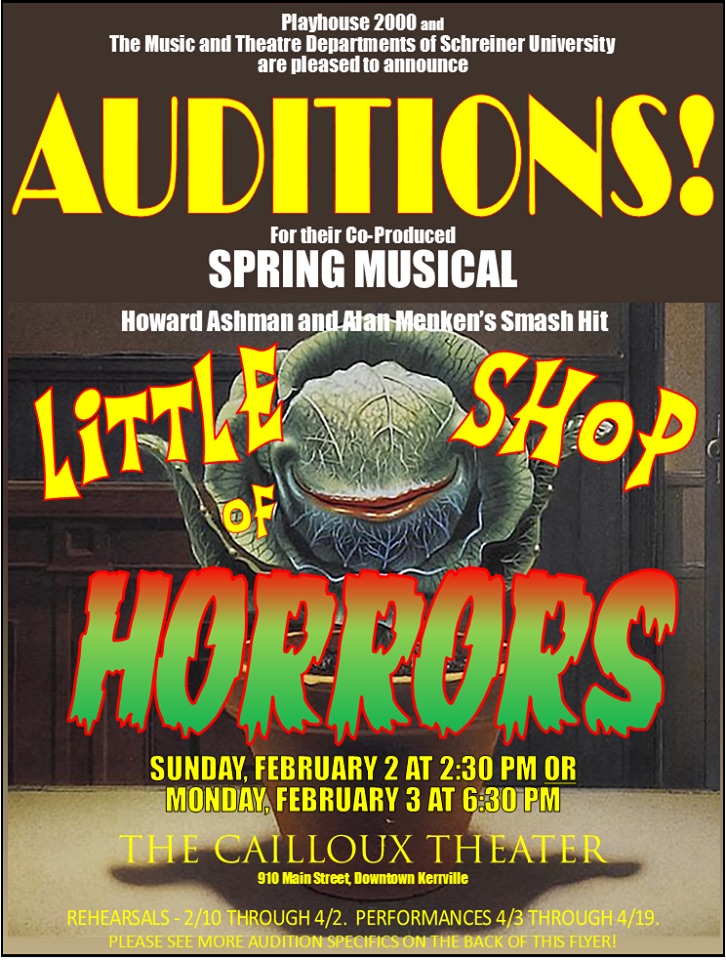