The Playboy of the Western World
by The Stage

The Playboy of the Western World is set in Michael James Flaherty’s public house in County Mayo on the west coast of Ireland during the early 1900s. Christy Mahon is a young man running away from his farm, claiming he killed his father. The locals are more interested in vicariously relishing his story than in condemning the immorality of his murderous deed. Christy’s tale captures the romantic attention of the bar-maid Pegeen Mike, the daughter of Flaherty. The play is best known for its use of the poetic language of Hiberno-English, heavily influenced by the Irish Language.

The Playboy of the Western World is a three-act play first performed at the Abbey Theatre in Dublin, on January 26, 1907.

Rehearsals will begin in early January. They will take place at various venues throughout Austin. The final schedule will depend on casting, but the director is shooting for Sun-Thursday evenings. There might be a Saturday afternoon. All cast members will be compensated.
These roles all call for an Irish dialect. We ask that you not let this discourage you from auditioning. The director asks that you simply TRY it, have some fun with the language – just put energy and commitment behind whatever you do. Not doing a perfect Irish dialect at the auditions will NOT disqualify you for a role, and doing a perfect dialect won’t guarantee you a role either.
We recommend familiarizing yourself with the play. You can read it here.
Casting all roles:
WOMEN
Pegeen Mike – runs the place, 20-30
Widow Quin – notorious neighbor, 30-50
Susan, Honor, Sara, Nelly – village girls, 18-25
MEN
Shawn Keogh – Widow’s cousin,  25-35
Michael James – Pegeen’s father, 45-65
Philly & Jimmy –  two nearby farmers, 40-70
Christy – “not from around here”, 25-35
Old Mahon – Christy’s father, 45-65 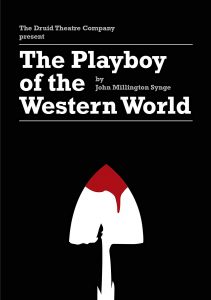 Bringing Austin a professional theater that is accessible, affordable, and socially conscious. Follow the journey of Austin's newest theater.