In Women in Jeopardy, Thelma and Louise meets The First Wives Club in this fun and flirtatious comedy. Divorcées Mary and Jo are suspicious of their friend Liz’s new dentist boyfriend. He’s not just a weirdo; he may be a serial killer! After all, his hygienist just disappeared. Trading their wine glasses for spy glasses, imaginations run wild as the ladies try to discover the truth and save their friend in a hilarious off-road adventure.

Due to Easter Sunday holiday, we're combining auditions for two different titles on one pair of dates coming up soon.
We'll audition for BOTH The Shakespeare In the Park 2019 production of The Merry Wives of Windsor AND Season 2019's Women in Jeopardy on Sunday and Monday, April 14 and 15.
Sunday's auditions are at 2:30; Monday's are at 6:30.  Merry Wives will audition in The Werlein Annex, Women In Jeopardy will audition in the VK Garage Theater.
It is possible to audition for both titles. Choose one to start, and talk with the director while you're there.
Jessica Sturm, director for Merry Wives..., will be looking for a wide variety of actors of all ages.
Jeffrey Brown, director for Women in Jeopardy, will be seeking four women, three playing 40's or 50's and one 20's, and two men, one 40's/50's one 20's.
Rehearsals of Merry Wives of Windsor will begin about April 22nd, and performances are set in Louise Hays Park on June 7 and 8.
Women In Jeopardy will begin rehearsal on May 6, with Tech Week beginning Sunday, June 9.  Performances will be June 13 to 30 in the VK Garage Theater.
Scripts for Women... are available for check out from the Cailloux Box Office during regular window hours.  (Please remember to return scripts promptly so that others may also check them out.)

Additional details will be coming soon.  Watch your email or the P2K Facebook page 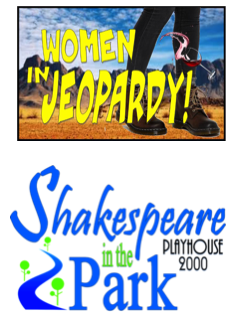