Auditions for HEIDI, a musical staged for FronteraFest 2018

Sunday, October 29, 2017 in the afternoon and evening, starting at 1:40 PM
4425 Red River St., Austin, TX 78751
Auditions will be held in the basement classrooms of the rectangular Educational Gymnasium building. The basement entrance is near Ellingson Lane, but is also accessible from the 45th St. parking lot.
Contact anneadams13@sbcglobal.net to schedule an audition and for questions.

Actors will be paid. The cast, most of whom will play multiple roles, should live close enough to Austin to come to several rehearsals, since some blocking is involved. Though the production is a staged reading, the actors will be off-mic during at least some songs, which they will memorize and lip-synch to a recording. Please bring a CD, or digital file on your phone, of a song to the audition to give a brief sample of your lip-synching and expressive ability. Also please prepare a short monologue of your choosing. RSVP to anneadams13@sbcglobal.net to schedule an audition time on Oct. 29 and for questions.

Heidi: should pass for age 8-9. Heidi is an orphan who is taken to to the Alps to live with her forbidding grandfather, and wins his heart. Later abducted to a rich family in Frankfurt, she is a source of comedy with her frank, unschooled ways. Her loving nature deeply touches her grandfather, Peter's grandmother, and her friend Klara. In the play Heidi is moved to tears 4 times, once from compassion, and 3 times from homesickness; she also expresses joy, sometimes with a twirl, so the actor should be able to move gracefully. She sings 3 solos including a narrative song, and parts of several other songs, so the actor would need to study the recording carefully to master the words, timing and expression.

Klara: should pass for age 12. Klara is a lonely invalid girl whose world brightens when Heidi comes to be her companion. Her solo song expresses longing for a friend of her own. She also sings in a few other songs, and has some comic moments. The actor should be able to laugh and suppress laughter convincingly. Klara’s healing in the mountains is conveyed in a wordless scene set to music, in which the actor progresses from faltering balance to dance-like movements.

Peter/ organ grinder: Peter is old enough to herd goats but his voice has not changed (9-13). Peter’s main scene is with Heidi in the mountain pasture, where he matter-of-factly answers Heidi’s questions. He proudly sings a song about his homeland. He has a line in another song, and sings in the ensemble song at the end. He appears in the opening scene, horsing around the village as the music plays, and in Klara’s healing scene, where he also does some exuberant movement. Note: the stage is small, but is surrounded by 3 steps which he could use.

Organ grinder-vendor: has a small singing part in one song.

Male Actor #1: Grandfather/ the doctor/ villager(s) - age: 50’s - 70’s
Grandfather: The actor should not have a high speaking voice, since his songs are sung by a baritone on the recording. Heidi’s grandfather is a forbidding, embittered man who shuns society. When orphaned Heidi is left on his doorstep, they begin a relationship which softens his heart. In the beginning the character shouts in anger and speaks curtly to adults, but throughout the play speaks gently to Heidi. Her departure leaves him bereft, and her eventual return moves him deeply. When she tells him about God as a loving father, he experiences a spiritual transformation in the climactic song of the play, during which he briefly and silently weeps. Humbled, he reaches out to the villagers he has scorned as he brings Heidi among them at last.
The doctor has a small speaking part in one scene, compassionately interacting with Heidi. Villager(s) have a few lines in one or two songs.

Male Actor #2: the pastor/ Sebastian the butler/ villager(s) - age: 30’s - mid-50’s
The pastor has a few solo lines in two songs, and sings in the final choral song. In his spoken scene he tries to reason with the grandfather and encourage him to bring Heidi to school in the village. At the play’s end he expresses grace and warmth to the villagers and to the transformed grandfather.Sebastian the butler has a line in one song, as well as spoken lines. He is highly amused at the exasperation Heidi causes the housekeeper, and struggles to stifle his laughter. He shows a mischievous bent toward the housekeeper, and also does his best to comfort the homesick Heidi. Villager(s) have a few lines in two songs and a whole choral song.

Male Actor #3: Herr Steiner, the tutor/ Herr Sesemann, Klara’s father/ villagers - age: mid 30’s - 50 The tutor (1 scene) is a somewhat stiff but kindly pedant who is at a loss when beggars and kittens appear in Heidi's wake. He sings in a comic song teaching Heidi about consonants.
Klara’s father (2 scenes; no singing) expresses impatience, amusement, and authority. He shows affection to his daughter and kindness to Heidi.

Female Actor #1: Peter's blind grandmother/ Klara’s grandmother/ villagers - age: late 50’s - 70’s Peter’s grandmother sings a lament about her dark world, but responds with delight to Heidi's friendship. She expresses sadness, love, joy, fear, and faith in God, and weeps when Heidi is taken away. Klara’s wise grandmother takes no nonsense from the tyrannical housekeeper when she comes to visit. She shows great interest in Heidi, comforting her in her sorrow by teaching her (in song) to pray to God.

Female Actor #2: Heidi’s Aunt Dete/ Tinette, the housemaid/ villagers - age: 20’s - 40’s
In her long comic narrative song (both sung and spoken), Dete gossips to her companion about the grandfather’s past, giving the background for the unfolding story. She pretends to be charitable, but is in fact hard-hearted and opportunistic, and when crossed, gives the grandfather a piece of her mind. She later reappears and abducts Heidi to Frankfurt, leaving her there against her will. Tinette has a tiny role in the Frankfurt scenes.
Villager(s) have a few lines in two songs and a whole choral song.

Female Actor #3: Fräulein Rottenmeier, the housekeeper/ Marta/ Brigitta/ villagers - age: 30’s - 50 The housekeeper is a formal, cold-hearted disciplinarian who is horrified by Heidi’s free spirit and unschooled ways, and expresses her exasperation in a comic song. She also has other comic moments when her dignity flies out the window.Marta is Dete’s walking companion during Dete’s song, in which Marta converses and sings a choice outburst.

Peter’s mother Brigitta has a small role in the scenes in their hut. 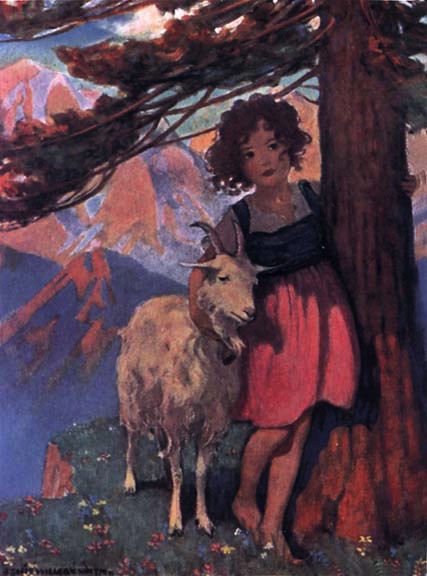