Review: The Lion, The Witch and The Wardrobe by The City Theatre Company
by Michael Meigs

Director Bridget Farias and her cast have put together a jolly version of The Lion, The Witch and the Wardrobe, with loving attention to the eccentricities of Narnia creatures.

Audiences will enjoy the glim from the 2005 film version produced by Disney, which was the best selling DVD in 2006, but both that film and this script follow closely the novel for children written by C.S. Lewis in 1949.

When this production was announced through ALT, one parent, Tim, was plainly disappointed. " Wish they had kid friendly show times. After my kid's bed time is a bit late to see a play. Was looking forward to this one. Oh well...."

Another reader, Anonymous, noted that the City Theatre runs a 5:30 p.m. show on Sundays. That could solve Tim's problem, but it does raise another point: what's the target audience for this production? 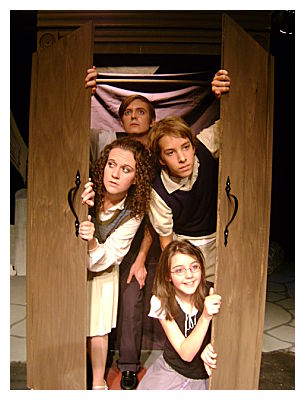 Narnies, maybe, in analogy to "Trekkies"?

The production rattles along so quickly, it seemed to me, that in order to appreciate it, one would need to know the story already. The audience gets one brief voiceover at the beginning mentioning the four children by name. But I don't recall any further exposition -- for example, the reason that we find them in the countryside at the quirky professor's house. That might have slipped by me, though. . . since I knew from the film that they had been evacuated from London's blitz.

In fact, C.S. Lewis wrote his story in 1939. Lewis resisted exegesis, whether Christian or otherwise, but that cold world of Narnia does have the chill of totalitarianism.

Plot, event and incident are plentiful in D. Heath Thompson's script, but those uninitiatied to Narnia could have used some strategically placed paragraphs here and there recapping the action, marveling at the magic properties of the wardrobe, and anchoring the parameters of Narnia. We enjoy Samantha Brewer as the White Witch, but we don't get a by-the-numbers reminder of why she's so bad, why it's winter but never Christmas, why the treacherous Edmund is her captive by right, or why Derek Vandi as Aslan the lion can do that great trick of sacrifice and resurrection. I think I heard one quick throwaway about "an older magic."

I'd have preferred that information in the spoken action onstage, but even a couple of paragraphs in the program might have been helpful. Particularly since the largely Narnie audience is not going to be worried about "spoilers." 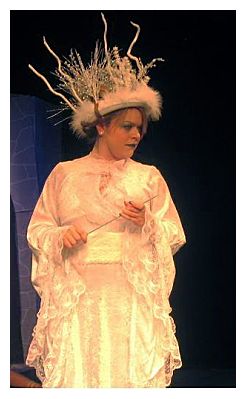 The costumes for major magic creatures, designed by Stacy Davis, are super, complemented in fine fashion by the makeup and the clever character movement. Director Bridget Farias orchestrates a rustling, moving world of bird-like wood creatures to serve as chorus, audience, and moving background. 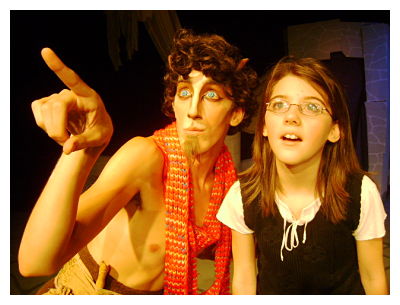 Samantha Brewer as the White Queen is a bad, bad girl but she would make a great date to a Halloween party on SoCo, particularly with that lavish costume and headdress. Good guy Aslan is ponderous in comparison, as befits a lion and benefactor. Heath Thompson is droll as the professor and somewhat unexpected as Father Christmas.

The four children are earnest things. My favorites were the girls. Laura Ray is the solemnly responsible older sister Susan and Shannyn Rose Cowart as little Lucy accepts the amazingly blue-eyed fawn Mr. Tummus (Austin Rausch) with the simple faith of the young. 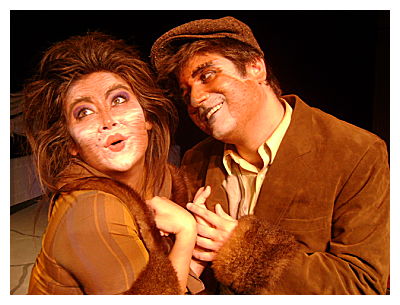 Rausch as the fawn has a fine crook-legged stride, and both of the Beavers are happy waddlers. Fiona Rene as Mrs. B is winsome, roly poly and talkative , a kind of beaverly Aunt Rose from the Yonkers Hadassah, and Bobby DiPasquale as Mr. B is a perfect match for that characterisation. 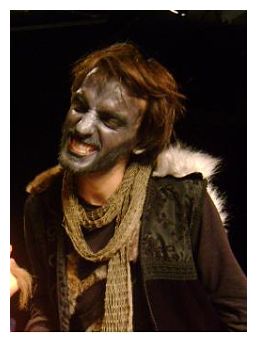 Narnia is a dark world, swept around by those black drapes, and the set decoration is a bit precarious.

If you're a Narnie, you'll enjoy this one. If you're not -- well, first of all, why not? Read the book! And if you're not, you can always look up the film, the book, and the author on Wikipedia. C.S. Lewis lived an astonishing life, surviving battle in World War I, devoting himself to teaching at Oxford and hanging out with Tolkien, turning from early atheism to devout Anglician Christianity, and writing scholarly works, accessible theology and children's literature. He carried that depth with assurance and lightness of touch -- he is still a great companion to the life of the mind.

Review by Elizabeth Cobbe in the Austin Chronicle, September 3

Click to view program of The Lion, The Witch and The Wardrobe by City Theatre Austin

The Lion, The Witch and The Wardrobe
by C.S. Lewis, adapted by D. Heath Thompson
City Theatre Company 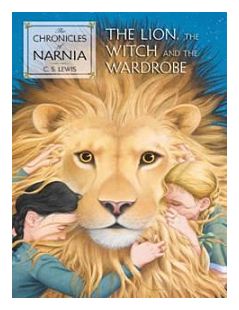