This third play in Sophocles’ Theban trilogy depicts the aftermath of the Theban civil war, a conflict that pits the children of Oedipus on opposing sides. Despite a decree from the city’s new ruler Creon, Antigone defies her uncle, insisting on a proper burial for both of her brothers.  Directed by Marcus McQuirter.  Featuring guest artists Kevin Gates and David Boss and designs by Ia Enstera, Megan Reilly, Stephanie Dunbar, and Mason York.

ACC Drama  The public face of ACC’s Drama Department is in its performances which have charmed Austin citizens for the past three decades.  Performed both in the Mainstage Theater and the Gallery Theater at the Rio Grande Campus, performances have included an ambitious selection of musicals, traditional plays, avant-garde theater, and original works. Behind the scenes, the department offers a full selection of classes in acting, voice, movement, make-up, costuming, production management, and technical theatre. The department’s Introduction to Theater is also a core-curriculum class for most majors. Please visit the department’s web site for more information, including course descriptions, degree plans, and a gallery of productions at http://www.austincc.edu/drama/ 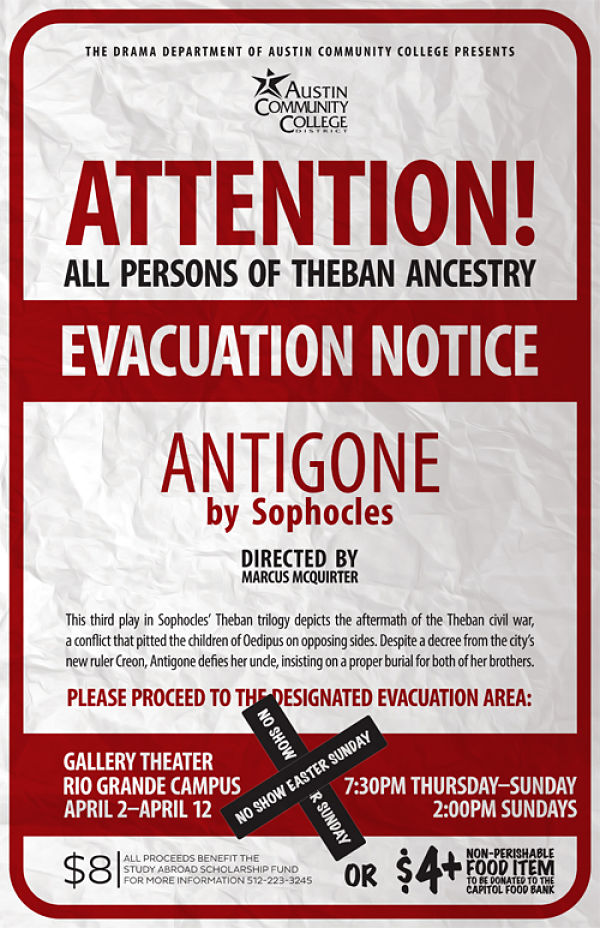