Comfortably ensconced in his charming Connecticut home, Sidney Bruhl, a successful writer of Broadway thrillers, is struggling to overcome a dry spell which has resulted in a string of failures and a shortage of funds. A possible break in his fortunes occurs when he receives a script from a student in the seminar he has been conducting at a nearby college—a thriller that Sidney recognizes immediately as a potential Broadway smash. Sidney’s plan, devised with his wife’s help, is to offer collaboration to the student for co-credit. Or is it? Holding the record for the longest-running comedy-thriller on Broadway, Deathtrap is filled with twists and turns in a series of thrilling events. It offers hilariously sudden shocks in such abundance that leaves audiences spellbound until the very last moment.

Deathtrap playwright Ira Levin was a very successful author of novels and plays. Besides writing the popular stage comedy No Time For Sergeants, Levin also wrote several novels that were made into successful movies. These include A Kiss Before Dying, Rosemary's Baby, The Stepford Wives, and The Boys from Brazil. Deathtrap was adapted into a successful 1982 film starring Michael Cain and Christopher Reeve

Deathtrap opens Friday, October 9th. The production will have nine performances at the Steve W. Shepherd Theater, October 9th through the 25th, 2020, Fridays and Saturdays, at 7:30 p.m.  Sundays at 2:00 p.m.

Admission is $29 for adults, $12 for children 17 and under. Box office hours beginning September 21st are Monday through Friday, 9:00 a.m. through 1:00 p.m. Tickets can be purchased online at www.fredericksburgtheater.org or by calling the box office at 888-669-7114. 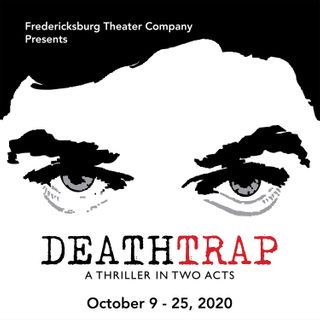